Some 60 crew members from the London Fire Brigade (LFB) were forced to respond after a blaze tore through Michelin-starred Indian fine dining restaurant Gymkhana. 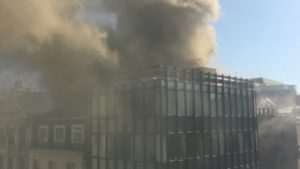 Footage from the scene showed smoke pouring from the building on Albemarle Street. A spokesperson for JKS Restaurants, which owns the site, confirmed nobody was harmed in the incident and the fire was extinguished three hours after it was reported.

The restaurant is now temporarily closed and will not accept bookings for the time being.

A spokesperson for JKS said: “At this stage, the cause of the fire is not yet known, however we would like to reassure the public that all staff and diners are safe. We are working with the London Fire Department to minimise all damage and prioritise the safety of the public and the surrounding area.

“At this time, we would like to thank the public and the London Fire Departments for their support and cooperation during this series of events.

“Currently, Gymkhana is not taking further reservations and all existing bookings are being retrospectively rescheduled and re-booked at other JKS Restaurants and partner venues to minimise further disruption.”

The interior of the site has become as notable as its cuisine, with the Hardens London restaurant guide 2019 giving praise for its “sophisticated interior design” and “old-style colonial cuisine”. The Michelin guide 2019 also noted its “interior… full of wonderful detail and plenty of wry touches”.